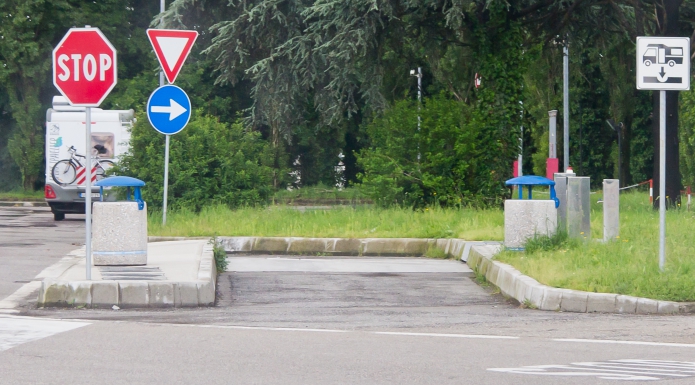 If there’s one thing RVers hate dealing with, it’s the gray water and black water from your RV’s holding tanks. Eventually, everyone has a black water story that they’ve experienced or witnessed. For new RVers, there’s the cringeworthy scene from the movie RV that haunts their fears.

But if you know what you’re doing and how to care for your holding tanks, gray water and black water are nothing to dread. Have questions about it? We’ve got answers!

What’s the difference between gray water and black water?

Gray water is all of the wastewater that drains from your shower and kitchen and bathroom sinks. Gray water has some bacteria but it can be filtered and reused in gardens or lawns, if done properly.

Black water contains human waste and is unsafe. It must be stored in its own tank and disposed of very carefully.

How often should I empty my black water holding tank?

Pro Tip! Wait until the holding tank is at least two-thirds full before flushing. If possible, don’t dump more than once every few days to a week—longer intervals mean more time to break down solids.

How accurate are the tank monitors?

If your tanks are free of debris, they’ll be pretty accurate. But once toilet paper or other debris is introduced, it can interfere with the tank probes.

Pro Tip! Try flushing the tank to resolve the problem. If that doesn’t work, clean out the tank with holding tank chemicals.

What are some best practices for dumping?

Wait until the tanks are full, or nearly full. Dump the black water tank first, then the gray tank. Dumping the gray tank last helps flush out the sewer hose.

After you dump both tanks, thoroughly flush out the tanks. Some RVs have a built-in system for flushing. If yours doesn’t, you can use tank cleaning supplies and chemicals.

When you’re connected to a sewer at a campground, always keep the tank valves closed until you need to drain. Otherwise, you won’t get the buildup you need for a thorough dumping.

Does my toilet use affect anything?

Yes! Here are a few dos and don’ts for your RV toilet:

Can I get rid of black water when I’m camping off the cord or boondocking?

No! Black water is not only foul, it’s filled with dangerous bacteria that can spread disease. Only use an RV dump station to empty your black water tank.

Can I dump gray water anywhere I want?

Not anywhere, but there are ways to safely empty your gray water tank if you’re not near a dump station. Gone with the Wynns has a terrific post on eliminating gray water (although, note the problems with using an evaporation pond).

Grease, bacteria, and other particles will cause the gray water to smell, and the grease can affect the health of the tank and valve assembly. Use holding tank chemicals to reduce odors and break down the grease. Some people pour dishwashing liquid down the drains to help break down grease and residue.

Pro Tip! NEVER use windshield fluid or antifreeze to flush the toilet during winter! The chemicals will destroy the seals in the tanks and eventually you’ll have an awful mess to clean up. It’s better to use the pink RV antifreeze, if you must.

by OperateBeyond.com Opens in new window